The Beginnings of Millennial Depression

Every time I begin to work with someone who has undergone some sort of trauma I prepare myself for the unfolding and unpacking ahead. Airing out the dust, chasing out the shadows—helping them stand up straight once again.

Generation after generation we’ve begun disconnecting from one other, little by little. Facebook, Instagram, SnapChat, FaceTime…we live in a virtual world. But just because we can power off our laptops at night doesn’t mean we can shut off our minds…or our hearts.  In fact, emotional pain has become more prevalent in our younger generations since we’ve been introduced to these virtual realities. We catch ourselves pining and lusting after a life that doesn’t even exist. And who knows this better than our very own millennials.

Millennial’s, that age group between 18-34. It used to be a tongue in cheek slang, but now it’s defining one of the most influential generations this world has ever seen. They’re brilliant, growing up in the rise of technology, deftly being in five places at once. But this technology has become a double-edged sword. Their smartphones cast a blue glow across their shadowed face as they scroll one last time, catching up on their friend’s happenings. What we fail to realize is the shadow, commonly seen as depression, is becoming even bigger day by day.

On college campuses alone, depression has skyrocketed to a whopping 5 million students. There’s so much pressure to be great and succeed, but with that pressure comes anxiety. They’ve been bred to be the best of the best, and if they fail…well that’s not even an option.

Some anxiety is healthy, but the amount that our millennia’s are facing is not. So what do they, and we, do in order to mask the pain and carry on? We numb ourselves. From overeating and overspending to copious amounts of prescription drugs, we’ve turned into an emotionally hollow culture.

But what’s interesting is this numbing is done out of good faith. We’ve learned to become more “in tune” to the noises inside our head. But unfortunately we have not yet learned how to channel that noise found in our second chakra, that place of feeling. Millennials don’t know what to do with this faux self-awareness. So, instead of healing they mask and numb the pain.

I’m not here today with a solution, although I do have many, or my reasoning’s behind this increase in pressure. Instead, I am here today to draw you to the very real problem of deep sadness that’s rising up in our youth. We must curb this mentality of perfection, starting as young as the elementary school years. Building our children’s self-worth, while encouraging them to succeed, but doing it without being pushy. Keeping our eyes open for telltale signs of sadness and seeking remedial remedies instead of immediately prescribing some small capsule to make life hurt just a little less.

Under our wounds lie the greatest of gifts. If we can brush away that shadow hovering over our second chakra everyone’s true potential will be so much clearer.

Join me on this journey on preventing and stopping this cycle of depression that is only just gaining momentum.

Join one of our Soul Circles this month at Centripetal Force Studio. The archetypal process will guide you deep inside yourself to get a better understanding of who you are, what you like and which direction to turn in life to find happiness. 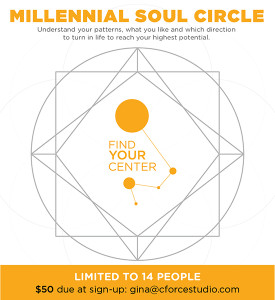